Saturday I woke up with my throat feeling even worse than it did before. I did not want to have another rainy, stay-inside-all-day sick day, so I decided what better thing to do than go to the Louvre? I took a ton of vitamin C, had a mug of tea, and set off through the rain.

This time, I started off exploring the Egyptian section. The Louvre has the most amazing and extensive collection of Egyptian art I have ever seen. It’s not just typical things you see in most museums, either. They have artifacts covering the entire range of Ancient Egyptian life. Just by walking through the galleries I feel like I gained a much better sense of what life was like for them than I have at any other time. I have always been fascinated by Ancient Egypt and would love to take a class on it (hey there, Ancient Art History credit I still need to fulfill) but seeing this collection really peaked my interest not only artistically, but regarding every aspect of their lifestyle. They were a really incredible people.

This is what it’s like to look at Egyptian art at the Louvre. Yeah.

Their mummy is much bigger than the Nelson’s and doesn’t have a creepy computer generated face on the label.

One of the most colorful steles I’ve seen 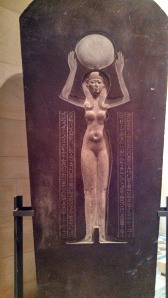 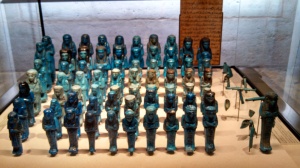 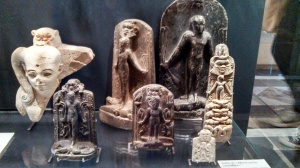 I think in a past life I may have been an Egyptian. As a child, my favorite toys were things that were very small. Polly Pocket, doll houses, you name it. I was the Queen of Tiny Toys. I also love things that are colorful and shiny. And, my favorite animals are cats and monkeys. Well, guess what they have a lot of in Egyptian artifacts? Tiny, colorful, shiny cats and monkeys!!! 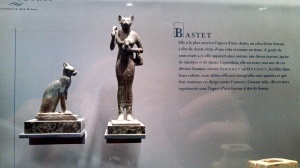 They have tons of other super tiny, intricate little sculptures as well. They are amazing! 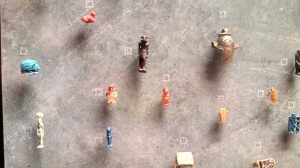 Look at the tiny hedgehog on the far left!! I didn’t even know they had hedgehogs in Egypt… 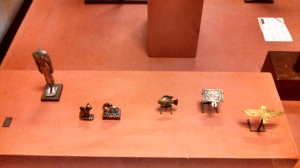 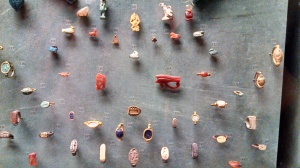 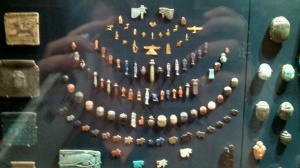 Also, some of the works were lit really beautifully. My phone pictures do it no justice, you’ll just have to go see it for yourself!

One of the reasons I picked Ancient Egyptian was because I figured it would eventually lead to the Seated Scribe and Code of Hammurabi. The Scribe was almost at the end of the Egyptian collection and when I finally saw it, it actually surprised me. It’s so big and vibrant!

I looked deep into the eyes of the Seated Scribe

For some reason I find a lot of Egyptian artwork in museums to be really amusing. One of my favorite things at the Nelson is the Egyptian head that looks exactly like Voldemort. Well, the Louvre has not escaped this scrutiny either.

This guy can not handle losing his nose

The Louvre has Voldemorts too! But they have ears.

Does anyone actually swim like this?? They’re like Ancient Egyptian versions of those scuba diver bath toys. 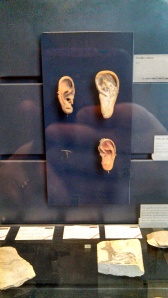 I found the ears

He’s so blue, he don’t know what to do

After I got through the Ancient Egyptian stuff I wanted to keep looking at ancient collections so I moved on to Greek and Roman.

They have soo much pottery!! I was amazed no one was in there until I went in and it was a bajillion degrees. I will probably spend some quality time in there when it gets colder.

I went in a circle somehow so I took the elevator downstairs and ended up right at the Venus de Milo.

I just kept walking through the sculptures. They were generally either missing really important body parts or had too much of the ones that remained. Also some craaazzzy headless drapery going on.

Those obliques are intense

This guy reminds me of someone… (hint: Nelson)

She has some serious issues

No, this is just a wall in the museum. Above a fireplace. 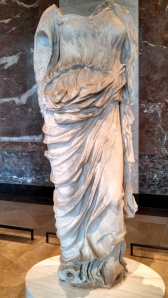 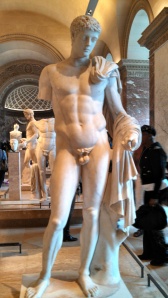 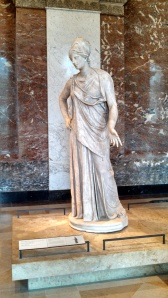 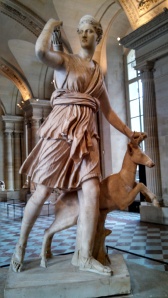 After the Ancient Greek and Roman sculpture, you are directly led to Northern European sculpture. The subject matter goes from ancient gods of marble to Jesus, Mary, and Popes in painted wood.

Well, except for her. 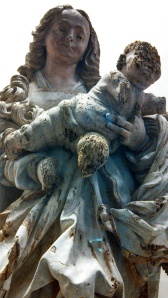 There’s that Northern love of grotesque detail I learned about!

All the while, I was trying to figure out how to get over to the rest of the ancient stuff where the Code of Hammurabi is, but I ended back in Italian and French painting where I was last time. Not that this is a bad thing, but I wanted to see new sections and I spent a lot of time there during my last visit. I finally figured out that I would need to get to the opposite side of the museum to see the rest of the ancient works, so I decided to go to Northern painting instead. It took me a while to find that, too, but when I finally did it was so worth it!

I totally forgot that these paintings were in the Louvre until I was standing in the room looking around me and I think I audibly said, ohhhhh! It was a nice surprise.

Look at the Louvre trying to be cute. Too bad no one follows this sign. Literally as I took this there was a woman photographing a statue using her flash. Sigh.

Hey there Lucas Cranach the Elder. He has a very similar composition at the Nelson.

Did not know this was here. Yay!

I super-studied this painting in art history and I think even wrote an essay about it. It’s really darkened in person.

From one of my favorite places to say, the Studiolo in Urbino!! 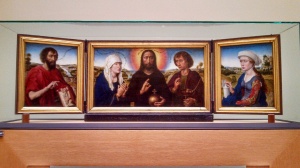 Also did not know this was here. The inside is in beautiful condition!

I shall end with this.

Some day I might go to the Louvre and actually bring my fancy camera. I want to experience it all with just my eyes first. Also when it’s not raining and there are less tourists. Working at the Nelson this summer spoiled me and I want museums to always be empty when I’m photographing in them!

This site uses Akismet to reduce spam. Learn how your comment data is processed.